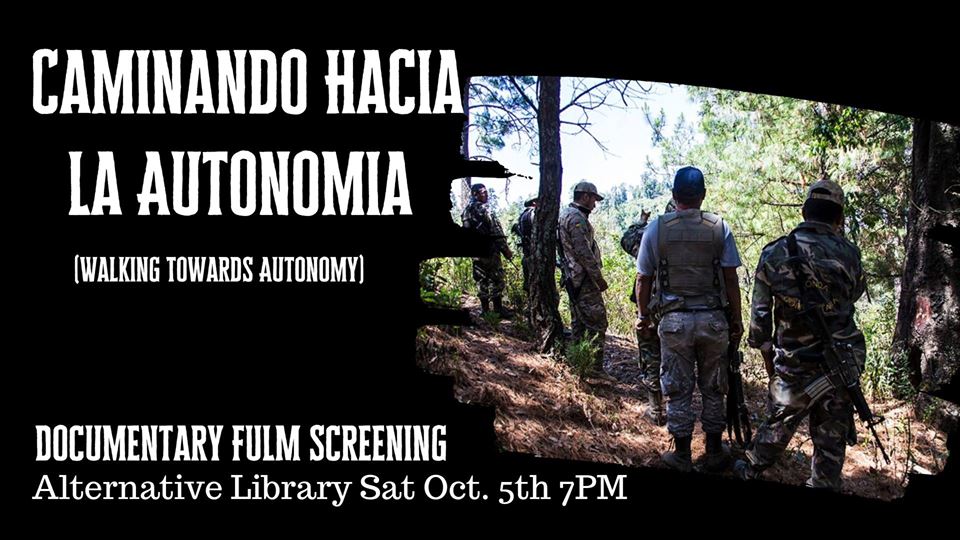 Cherán is a Purépecha indigenous community in Michoacán, Mexico. Beginning in 2000 organized crime infiltrated the town. With time the presence of narco-traffickers and their power grew substantially. They began to raze the precious forests surrounding the community. When community members tried to defend the forests they were assassinated or kidnapped. The forest was devastated and the people terrorized. The situation put everyone’s life at risk. At sunset Cherán turned into a ghost town.

On April 15, 2011 a group of women decided to stop the situation: They covered the streets to stop the pass of the clandestine tree-cutters. Rapidly the entire community reacted and the uprising united, burning cars and setting up barricades at all the town entrances. Against all this, the politicians and local police fled Cherán in fear. The community took the city government offices like the vehicles and weapons of the police, to begin to provide security. At the same time the town decided to definitively expel the political parties to retake their traditional forms of self-government.

Four years after the uprising, community members speak to us of the different stages that have passed in the construction of their new world, where you are really giving voice to the people, in which the boss is the assembly, while the government obeys. This is the beginning of a long process of building autonomy of which each and everyone can learn.

???? ????? ??? ???????? ????????? ???:
Simón Sedillo has contributed to the production of a wide variety of documentary films, which focus primarily on the effects of neoliberalism and militarism on indigenous communities, immigrant communities, and communities of color in the US and Mexico. Sedillo tours universities and community centers throughout the USA screening films and facilitating discussions and workshops on political economy and geopolitics in Mexico and the USA.

Simón also teaches geopolitics and political economy and is the Coordinator for Independent Studies at SURCO for a summer and a winter study abroad program in Oaxaca, Mexico. He has been teaching geopolitics in the US and community based media production in communities in the US and Mexico for the last 15 years. Simón has a growing archive of workshops, lectures, articles, and documentary films about community based resistance to neoliberalism, militarism, and white supremacy.