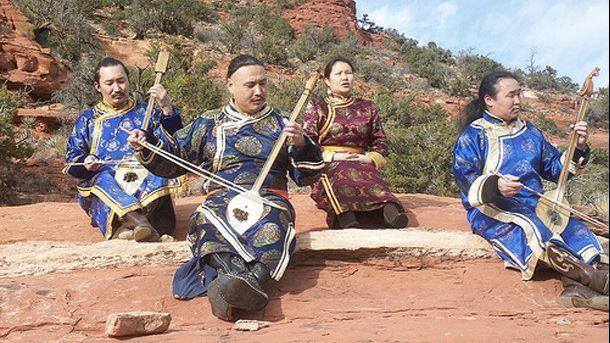 The word Chirgilchin has two translations: “dance of the air in the heat of the day” and “miracle.” Established in 1996, Chirgilchin is a group of musicians from Tuva, a small Russian province north of Western Mongolia. Their music tells stories of their homeland, its horses and its people. The monotone sustained notes that branch out into overtone singing with slight shifts in pitch give Tuvan music its characteristic buoyant yet meditative drone quality.
https://www.pnmartists.com/chirgilchin

Throat-singing is an extraordinary vocal form in which one singer produces two or more voices simultaneously, the low sounds in the throat harmonizing with middle and high flute-like overtones, to create richly layered melodies that evoke Central Asian steppes and nomadic life. Atmospheric and mesmeric, this music is almost too difficult to describe in words and must be heard to be believed. The most advanced forms of throat-singing come from Tuva, and the members of Chirgilchin are among the best and most accomplished throat-singers in all of Tuva.

The concert will be opened by a solo performance from Yuliyana Krivoshapkina, a singer and virtuoso in the art of the khomus, the national instrument of the Sakha Republic. It functions much like a Jew’s harp, but differs in several respects. A conventional Jew’s harp is limited in range, volume, and pitch. The khomus is loud and strikingly expansive in range. Yuliyana has mastered playing sounds across nearly three octaves. Her music draws on the powers of Nature and the wisdom and traditions of the Yakut people to portray the timeless relationship between Man and the Universe.

~~~
AltLib is always ALL AGES