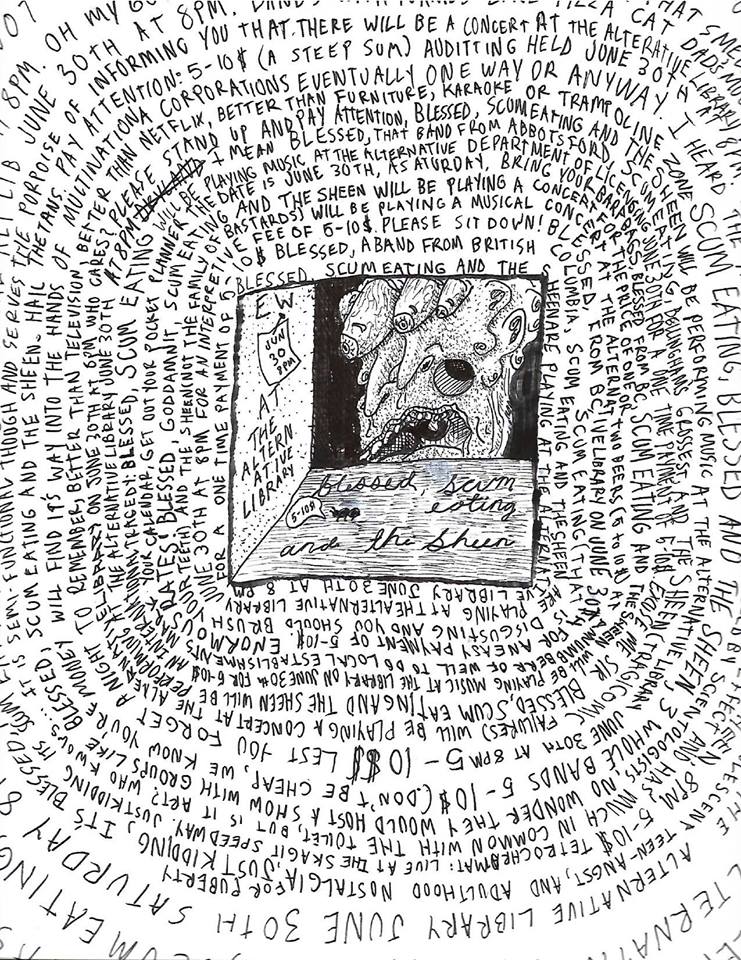 Scum Eating (B’ham), Blessed (Vancouver BC) and The Sheen (B’ham)
at The Alternative Library
Starts at 7:45
5-10$ sliding scale

Scum Eating – Scum Eating is where talking shit on Facebook intersects with the existential void of trying to have human relations. Or we’re just a socially conscious disco garbage band.
https://scumeating.bandcamp.com/

Blessed – Blessed is a band based on uncompromising work ethic, a commitment to democratic involvement between members, striving never to repeat itself. Comprised of members from the Fraser Valley, the off-to-the-side Vancouver suburb the group resides in, Drew Riekman, Jake Holmes, Reuben Houweling, and Mitchell Trainor came together to create something they had been looking for in their previous projects. Between the four, their projects have toured internationally (US, EU), recorded with Corin Roddick (Purity Ring), and played many esteemed festivals (Sled Island, Rifflandia, NXNE, SXSW). Blessed has, in its short existence, been fortunate enough to play alongside Garrett Klahn (Texas Is The Reason), The Courtney’s (Flying Nun), Preoccupations (JagJaguwar), Chastity (Captured Tracks) and Fucked Up (Matador).
https://blessedband.bandcamp.com/