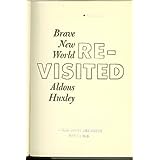 
Today the science of thought control has raced far beyond the dreams of Hitler and Stalin. Methods for destroying individual freedom are being rapidly developed, and the pressures to adopt them are becoming increasingly powerful. Now, in one of the most important, fascinating, and frightening books of his career, Aldous Huxley scrutinizes these and other threats to humanity and demonstrates why we may find it virtually impossible to resist them. With overpowering impact, this book is a challenge to complacency and a plea that mankind should educate itself for freedom before it is too late.