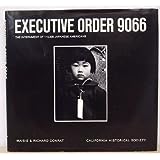 
onfiction. Prefaces by Michael McCone and Don T. Nakanishi. The days following the Japanese attack on Pearl Harbor were dark days of the American spirit. Unable to strike back effectively against the Japanese Empire , Americans in the Western states lashed out at fellow citizens and resident aliens of Japanese ancestry. Executive Order 9066, signed by President Roosevelt on February 19, 1942, was the instrument that allowed military commanders to designate areas “from which any or all persons may be excluded.” Under this order all Japanese and Americans of Japanese ancestry were removed from Western coastal regions to guarded camps in the interior. Former Supreme Court Justice Tom C. Clark, who represented the Department of Justice in the “relocation,” writes in the Epilogue to this book : “The truth is–as this deplorable experience proves–that constitutions and laws are not sufficient of themselves. Despite the unequivocal language of the Constitution of the United States that the writ of habeas corpus shall not be suspended, and despite the Fifth Amendment’s command that no person shall be deprived of life, liberty or property without due process of law, both of these constitutional safeguards were denied by military action under Executive Order 9066.