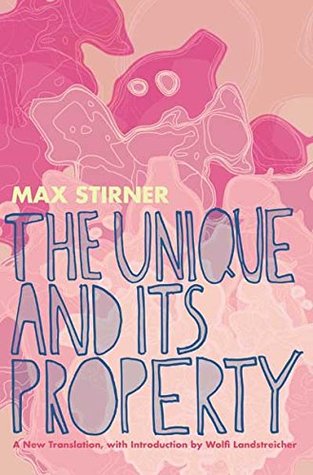 The Unique and Its Property


Johann Kaspar Schmidt (aka Max Stirner) wrote this trailblazing political text in 1845. It is a statement that the individual is the measure of all things and establishes the foundation that existentialism, egoism, and nihilism are built on. Every group, every collectivity, demands collaboration with a set of rules and expectation, with a morality. Stirner provokes us to acknowledge our own capacity, as well as the capacities of those around us.

Previously only available in English through a translation from 1907 (which tragically titled the book The Ego and his Own)–a translation that removed some of the biting humor and occasional crudities that make Stirner more fun to read–this translation by Wolfi Landstreicher corrects that, updates the language in general, and removes the confusion involved with using terms that have changed in meaning in the intervening years.

From the translators introduction:
I made this translation for those who rebel against all that is held sacred, against every society, every collectivity, every ideology, every abstraction that various authorities, institutions, or even other individuals try to impose on them as a “higher power,” for those who know how to loot from a book like this, to take from it those conceptual tools and weapons that they can use in their own defiant, laughing, mocking self-creation, to rise up above and against the impositions of the mass. In other words I did this translation for those who know how to treat a book not as a sacred text to either be followed or hermeneutically dissected, but as an armory or a toolbox from which to take whatever will aid them in creating their lives, their enjoyments

This new version of Wolfi’s translation includes an index (indices are good, we want more!) and a gorgeous cover that refutes many of the expected associations with this book.