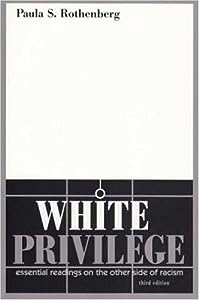 
Studies of racism often focus on its devastating effects on the victims of prejudice. But no discussion of race is complete without exploring the other side–the ways in which some people or groups actually benefit, deliberately or inadvertently, from racial bias. This is the subject of Paula Rothenberg’s groundbreaking anthology, White Privilege.

The new edition of White Privilege once again challenges readers to explore ideas for using the power and the concept of white privilege to help combat racism in their own lives, and includes key essays and articles by Peggy McIntosh, Richard Dyer, bell hooks, Robert Jensen, Allan G. Johnson, and others. Three additional essays add new levels of complexity to our understanding of the paradoxical nature of white privilege and the politics and economics that lie behind the social construction of whiteness, making this edition an even better choice for educators.