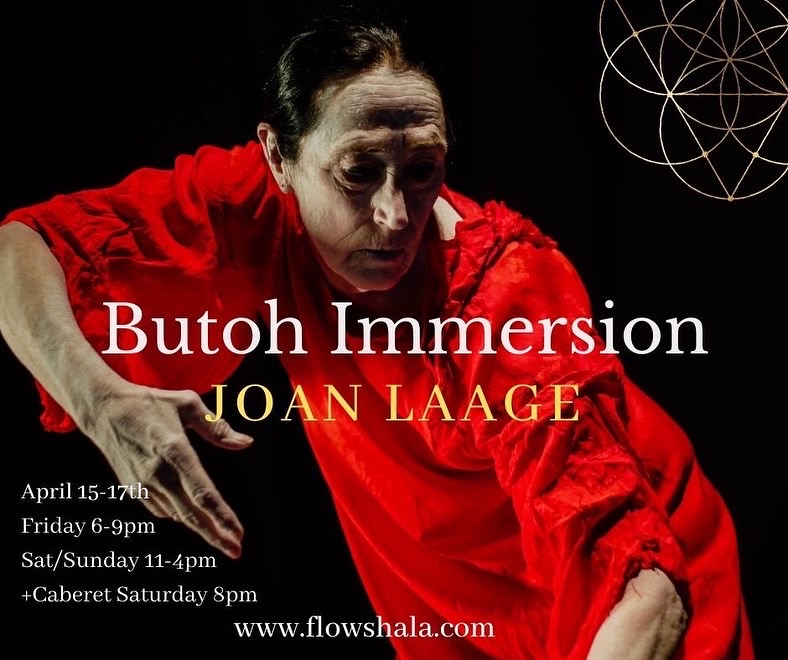 This weekend-long butoh immersion with renowned teacher, Joan Laage, will be co-presented with the Flow Shala, where this event will be hosted. Please see their website for ticketing!

This workshop is a process of erasing and re-creating the body through guided improvisation largely inspired by nature imagery.

Experience training methods towards a supple body and mind and investigate aesthetics common to butoh through creative explorations. ETS explores endless questions: What is life? What is the human condition? What is the body? The workshop structure includes explorations of physical, natural, and transforming bodies. Partner work will facilitate participants’ individual and collective journeys. In this workshop we will focus on earth imagery – earth, trees, roots, etc. – and introduce imagery from the famous Japanese Ukiyoe wood block prints. The workshop draws from Joan’s training with Butoh Masters Kazuo and Yoshito Ohno and Yoko Ashikawa in Tokyo and her background as a Tai Chi practitioner and professional gardener.

Joan Laage (Kogut) studied under butoh masters Kazuo Ohno and Yoko Ashikawa and performed with Ashikawa’s group Gnome in Japan in the late 80s, and more recently, has enjoyed training with Atsushi Takenouchi. After settling in Seattle in 1990, she formed Dappin’ Butoh, a company known for its appearances in Seattle’s fringe theater and dance festivals. Joan has performed and taught at national and international butoh festivals, was a featured artist at the UCLA Butoh Symposium in May 2011 and has been an adjunct faculty at Cornish College of The Arts (Seattle). She is featured in Dancing Into Darkness: Butoh, Zen, And Japan and Butoh: Metamorphic Dance and Global Alchemy by Sondra Horton Fraleigh and in a soon to release book by Tanya Calamoneri about butoh in the Americas.Her site-specific “Wandering & Wondering” is an event at the Seattle Japanese and Kubota Gardens. Joan is a founding member of DAIPANbutoh Collective which produces an annual butoh festival in Seattle. She has been teaching intensive weekend workshops and directing site-specific group works in Port Townsend, WA for Salish Butoh this past year.