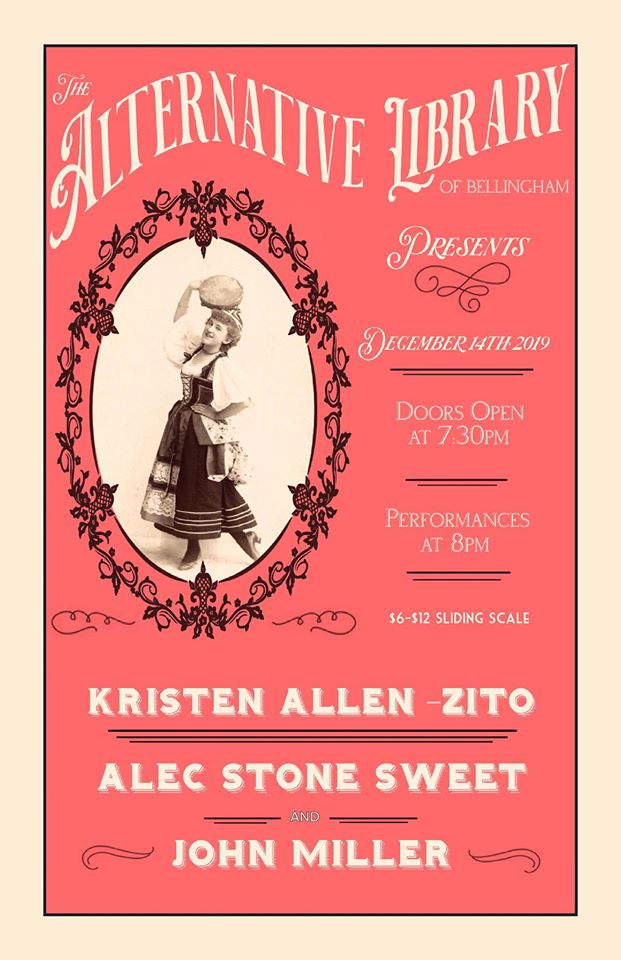 Join us for a night of boundary crossing folk music, featuring songs from three innovative players ~

Kristin Allen-Zito – Kristin Allen- Zito is an indie-folk singer from Bellingham, Washington, well-known for being the lead singer of the electro-punk band The Trucks. She uses captivating story telling to create unique and compelling records.
http://www.kristinallenzitomusic.com/

Alec Stone Sweet – Alec Stone Sweet is a professor of law, currently based in Singapore, though originally hailing from Bellingham, WA! He began experimenting with clawhammer guitar (rather than banjo) about 20 years ago and his music has since inspired many others to start playing in that style. He will be joined for this set by longtime collaborator, Richard Schultz.

John Miller – John Miller has been a professional musician for close to fifty years, focusing on performing, composing and teaching. After starting out in Country Blues and Old-Time music, John moved into Jazz Standards and Brazilian music. He has recorded seven solo albums/CDs, and performed on many others in collaboration with such musicians as violinist Ruthie Dornfeld, mandolinist John Reischman, singers Rebecca Kilgore, Karin Plato and Ginny Snowe, multi-instrumentalist Orville Johnson and harmonica player Grant Dermody. John will be doing a rare solo performance at the Alternative Library.
https://www.johnmillerguitar.com/