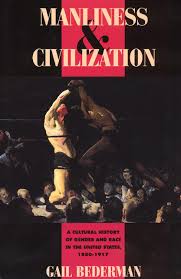 Manliness and Civilization: A Cultural History of Gender and Race in the United States, 1880-1917


When former heavyweight champion Jim Jeffries came out of retirement on the fourth of July, 1910 to fight current black heavywight champion Jack Johnson in Reno, Nevada, he boasted that he was doing it “for the sole purpose of proving that a white man is better than a negro.” Jeffries, though, was trounced. Whites everywhere rioted. The furor, Gail Bederman demonstrates, was part of two fundamental and volatile national obsessions: manhood and racial dominance.

In turn-of-the-century America, cultural ideals of manhood changed profoundly, as Victorian notions of self-restrained, moral manliness were challenged by ideals of an aggressive, overtly sexualized masculinity. Bederman traces this shift in values and shows how it brought together two seemingly contradictory ideals: the unfettered virility of racially “primitive” men and the refined superiority of “civilized” white men. Focusing on the lives and works of four very different Americans—Theodore Roosevelt, educator G. Stanley Hall, Ida B. Wells, and Charlotte Perkins Gilman—she illuminates the ideological, cultural, and social interests these ideals came to serve.