Sideshows by the Seashore: Butoh Cabaret 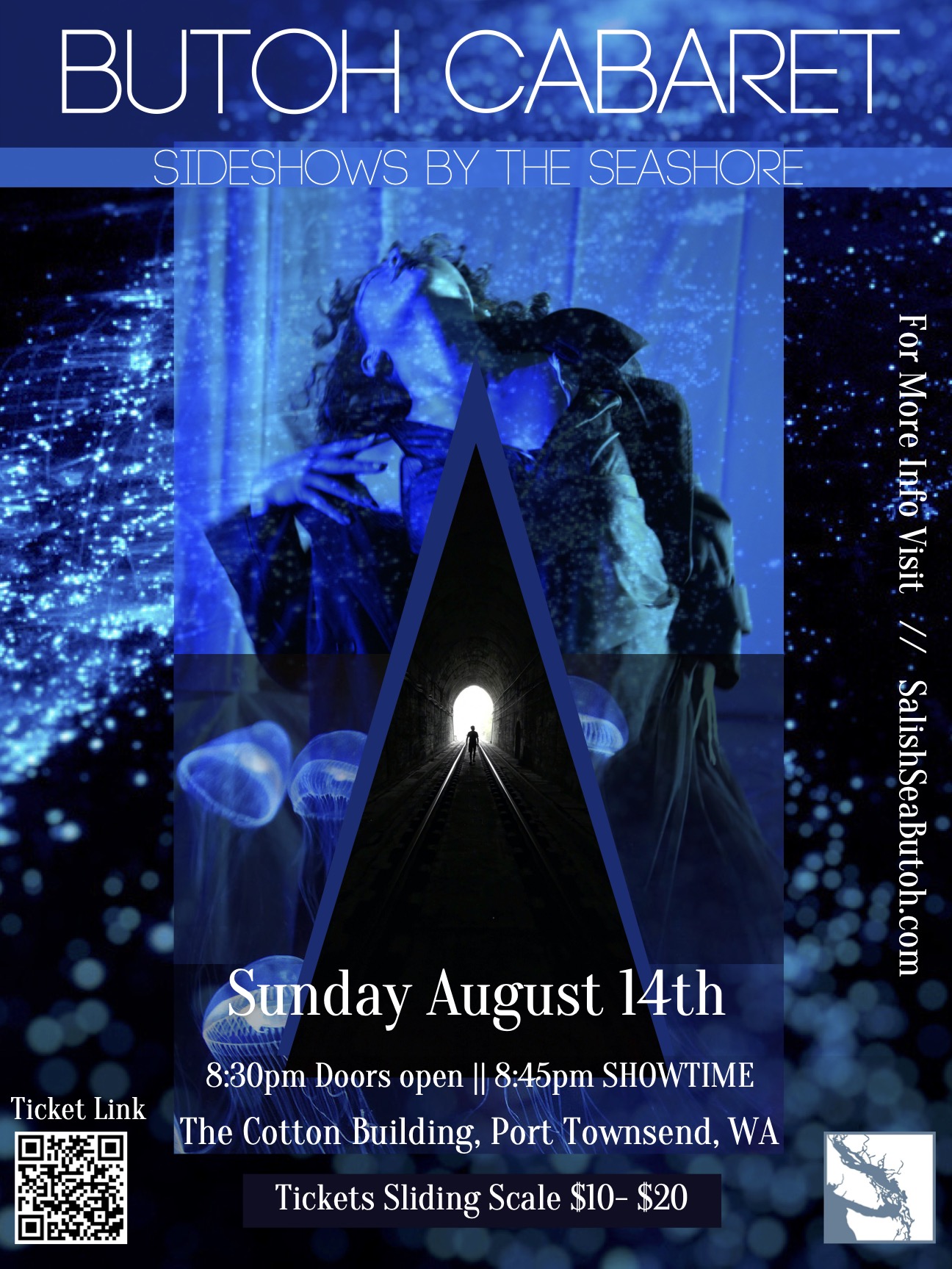 Sideshows by the Seashore: BUTOH CABARET Extravaganza
A Marvelous Night of Madness, Magic and Butoh Cabaret

Prepare to be swept away by a wild, whimsical whirlwind of rambunctious dance, theater and Live music of all shapes and sizes at THE COTTON BUILDING in downtown Port Townsend! Featuring over a dozen vignette solo and ensemble performances probing the fantastical dancing FUSION of Butoh-inspired performance art and burlesque entertainment, this night-time blowout is the culmination of the 2nd-ever Salish Sea Butoh Festival in Port Townsend, Washington. We invite you to celebrate with us!

This year, Salish Sea Butoh has assembled a wide array of musicians, magicians, singers, performance artists and dancers, all of whom have been tasked with presenting original stage works that explore BUTOH CABARET through the lens of their own particular aesthetic, discipline and artistic lineage. As a point of artistic reference and inspiration, our show is informed by the radical Japanese choreographer Tatsumi Hijikata who developed Butoh with his ensemble of burlesque dancers in an effort to defy and subvert authority, including conventional notions of dance. This iconoclastic, avant-garde dance form was developed hand-in-glove with the CABARET scene of the Tokyo underground throughout the 1960s. During the day, Hijikata trained his dancers in exercises and techniques that would become Ankoku Butoh. At night, they experimented with bringing their exploration into the competitive marketplace of cabaret & burlesque. According to dance scholar Rosemary Candelario, his shows got a reputation for being a kind of ‘weird, funky cabaret’ in which nudity appeared along with Surrealist and Dadaist images.” Inspired by this historical reference, Salish Sea Butoh challenges artists to explore the theme of FUSION & ALCHEMY by deconstructing and reinventing their particular art form, whatever it might be, and combine elements from the worlds of both cabaret and Butoh. We asked: If the theme is FUSION/ALCHEMY — of the self, of society, of art, of politics — what will it take to bring this about??

THE AUDIENCE TOO is encouraged to come be a part of the experience! Wear your most expressive & outrageous costume/look, and help celebrate the festival’s theme of FUSION/ALCHEMY. An on-site makeover room will stand ready to accessorize willing participants, and we’ll have a photo booth set-up during part of the evening to celebrate!

The Alternative Library will exhibit a curated selection of local and international small-press art books during the event.

ABOUT BUTOH:
Butoh, which incorporates elements of Surrealism, Dada, French Existentialism, German Expressionism, Japanese theatre and eastern spiritual thought, was first developed in the late 1950’s through experimental collaborations between its founders Tatsumi Hijikata and Kazuo Ohno. Their work established Butoh as disciplined and rigorous, yet spontaneous and idiosyncratic, intellectual and experimental, yet grounded in the human body. Rather than aspiring to an aesthetic ideal, the dance attempts to expose the joys and sorrows of life, exploring the most fundamental elements of physical and psychological existence. Despite the fairly recent origination of this dance form, it has quickly appealed worldwide and demonstrated that it speaks to something primordial within us.

ABOUT BUTOH CABARET:
As a budding artistic genre, BUTOH CABARET has been most prominently developed and proliferated by two artists from different corners of the globe: Australia-based dancer and choreographer Yumi Umiumare and Mexican artist Diego Piñón. Salish Sea Butoh celebrates the contributions of both of these amazing artists to the emerging field of BUTOH CABARET and draws inspiration from these two and other creative sources as well to further develop, nurture, share and cross-pollinate this dynamic fusion of art forms. Since the late nineties, Yumi Umiumare has been developing her unique style of visceral dance-theater performance and creating original Butoh Cabaret works. Originally born in Hyogo, Japan, Yumi is based in Australia where she has presented the hugely successful and well-received DasSHOKU BUTOH CABARET performance series, renowned for provoking visceral emotions and cultural identities with wild humor. According to Yumi, in the 1950s, Butoh was relegated to street performers and underground nightclubs in Tokyoalmost like a guerrilla dance movementand these performances shocked and provoked. I was trying to bring back the energy and rawness of Butoh by combining it with the accessibility of cabaret; this combination is so unique and exciting.” Separately, a group of artists studying with Mexican artist Diego Piñón launched the CONEY ISLAND Butoh and Beyond Festival in 2016, probing the fantastical dancing partnership of Butoh and cabaret performance on CONEY ISLAND USA’s burlesque stage in NYC. For the next four years, through his artistic intensives and ensemble performances in Brooklyn, Diego Piñón re-branded the festival as ritual cabaret a reflection of the defining aesthetic that resulted from his immersion into the historical and contemporary Coney Island. Cabaret, burlesque, vaudeville and circus sideshow have had a long and storied history in Coney Island, making it a perfect venue to explore the boundaries of ritual & entertainment. Piñón, who hails from the mountain town of Tlalpujahua Michoacán, fuses aesthetic principles stemming from Mexican shamanism, Japanese Butoh and community-based ritual dance.