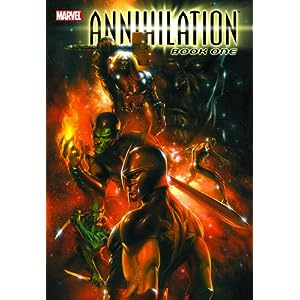 
Annihilus, lord of the Negative Zone, has declared war! Hordes of loyal soldiers swarm from the center of the universe, and only a handful of heroes can resist destruction! As the Xandarian Nova Corps meet its doom, only Richard Rider – the man called Nova – survives. Now the sole custodian of the Worldmind, the Zandarian’s database of knowledge and experience, can he rediscover himself in time to lead the war effort against the Annihilation Wave? Drax the Destroyer returns from exile on Earth to mentor Nova – but wait until you see his dangerous new persona! Guest-starring Quasar, Ronan the Accuser, the Super-Skrull and Thanos.