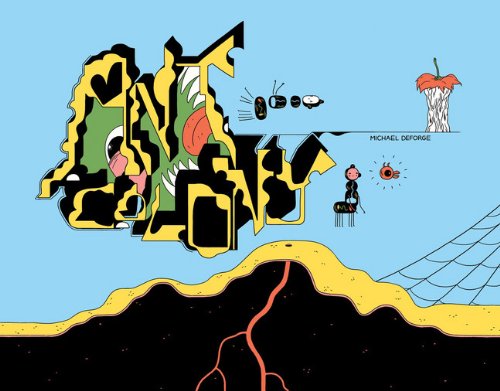 
From its opening pages, Ant Colony immerses the reader in a world that is darkly existential, with false prophets, unjust wars, and corrupt police officers, as it follows the denizens of a black ant colony under attack from the nearby red ants. On the surface, it’s the story of this war, the destruction of a civilization, and the ants’ all too familiar desire to rebuild. Underneath, though, Ant Colony plumbs the deepest human concerns—loneliness, faith, love, apathy, and more. All of this is done with humor and sensitivity, exposing a world where spiders can wreak unimaginable amounts of havoc with a single gnash of their jaws.
In the few short years since he began his pamphlet-size comic book series Lose, Michael DeForge has announced himself as an important new voice in alternative comics. His brash, confident, undulating artwork sent a shock wave through the comics world for its unique, fully formed aesthetic.