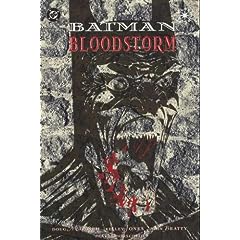 
Written by Doug Moench, Art by Kelley Jones and John Beatty The second part in the vampiric trilogy, this book begins where BATMAN: RED RAIN ended. Batman has destroyed Dracula but at the price of his own humanity. Now the famed protector of Gotham is a vampire himself and must battle his own bloodlust as he attempts to be the savior of the innocent. But as his isolation and affliction drive the Dark Knight to the brink of insanity, the Joker takes over the remnants of Dracula’s undead legions and begins to ravage the city. Struggling with his newly acquired dark nature and desire to kill, Batman must choose between the preservation of his own soul and the survival of Gotham.