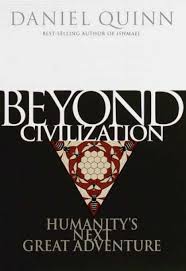 Beyond Civilization: Humanity’s Next Great Adventure

Beyond Civilization makes practical sense of the vision of Daniel Quinn’s best-selling novel Ishmael. Examining ancient civilizations such as the Maya and the Olmec, as well as modern-day microcosms of alternative living like circus societies, Quinn guides us on a quest for a new model for society, one that is forward-thinking and encourages diversity instead of suppressing it. Beyond Civilization is not about a “New World Order” but a “New Personal World Order” that would allow people to assert control over their own destiny and grant them the freedom to create their own way of life right now — not in some distant utopian future.