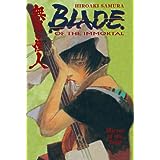 Blade Of The Immortal Vol. 13: Mirror Of The Soul


Anotsu Kagehisa, master swordsman and leader of the rogue Itto-ryu dojo, has sheathed his blade for the moment to join in marriage with the daughter of yet another dojo soon to be brought under his dark wing. But for a man of action, the formal traditions of feudal Japan can be just as tense and fraught with hidden agendas as the battlefield. And while Anotsu may indulge in a moment of peace, his enemies are not at rest, among them Rin, who has stalked him for years to take revenge for the murder of her parents. Anotsu had best make sure that if he stops to smell the flowers, he doesn’t end up losing his head!