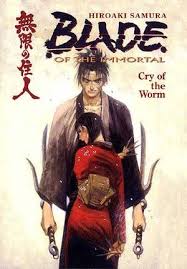 Blade of the Immortal Vol. 2: Cry of the Worm


The curse of the bloodworm is what keeps Manji alive — slit his throat or stab him in the heart and those mystical worms will force his body to heal. This immortal curse will not be lifted until Manji has killed one thousand evil men. Manji`s female companion, Rin, finds the treasured sword of her destroyed Mutenichi-ryu dojo (school of swordsmanship). The ronin who has it must have been involved in the destruction of the school — and that means that Manji could be one step closer to ending his curse. If you like ninja action, Hiroaki Samura`s Blade of the Immortal will keep you on edge.