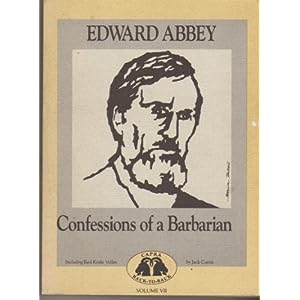 Confessions of a Barbarian


Edward Abbey was an anarchist, activist, philosopher, and the spiritual father of the environmental movement. He was also a passionate journal keeper, a man who filled page after page with notes, philosophical musings, character sketches, illustrations, musical notations, and drawings. His “scribbling,” as he called it, began in 1948, when he served as a motorcycle MP in postwar Italy, and continued until his death in 1989, totaling twenty-one volumes.

His journals are the closest thing to an Abbey autobiography we will ever have. They reveal his first youthful philosophical ruminations about art, love, literature, and anarchy as a student at Edinburgh, follow his wanderings through Europe, Scandinavia, and the eastern United States and finally to his spiritual home, the American West; record his many loves and marriages; and chronicle his lifelong struggle to preserve the disappearing southwestern wilderness, as well as his bitter and often hilarious disputes with the East Coast intelligentsia. His journals contain the first inklings—backgrounds, narrative pictures, and sketches—of his hard hitting, popular, irreverent published works. But perhaps most important, they offer us a portrait of Abbey the man: the friend, enemy, husband, lover, loner, writer, and fiery environmentalist who forever changed the way we look at the American West.

Edited by Abbey’s good friend, writer David Petersen, Confessions of a Barbarian presents the best of these previously unpublished journals for the first time, illustrated with Abbey’s own sketches.