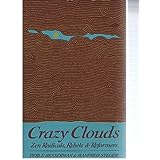 
Crazy Cloud is the pen name assumed by Ikkyu who was a Zen poet, calligrapher and wandering teacher. The name itself is a pun on the Japanese word denoting the Buddhist monk whose detachment from wordly life has him drifting like a cloud over water. The “Crazy Clouds” of this book are those innovative, nonconformist Zen masters, the wandering seekers and sages often disguised as beggars, nomadic preachers and “madmen”, whose singular Zen way has profoundly traditional practices of meditation, daily life and spiritual, social and political attitude in Zen Buddhism. Spanning a period from 8th-century China to 20th-century America, the book portrays the lives and teachings of Zen masters like the fierce Rinzai, the easy-going layman P’ang, the renegade Ikkyu, and the lay monk Nyogen Senzaki all of whose interpretations of even the most radical forms of practice proved too enigmatic and avant garde for their contemporaries, but which remain invaluable guidelines for practitioners in today’s Western Zen world of feminists, anarchists, ecologists and spiritual activists.