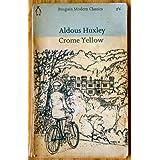 
This famous novel is Huxley’s bold exploration into love and sex. When it first appeared, it struck the reading public like a bolt of lightning. It was denounced on both sides of the atlantic. It was forbidden to the young and even credited with – or blamed for, according to viewpoint – the downfall of post-Victorian standards of morality. After more than thirty years, it remains an immortal masterpiece of wit and passion.