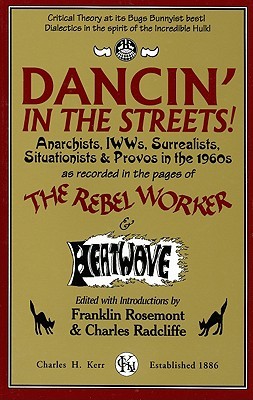 Dancin’ in the Streets! Anarchists, IWWs, Surrealists, Situationists & Provos in the 1960s


Most books on the 1960’s focus on large liberal organizations and reformist politics. This one is unabashedly devoted to the far left of the far left. DANCIN’ IN THE STREETS is a collection of writings from two legendary but hard-to-find journals, The Rebel Worker & Heatwave, known for their highly original revolutionary perspective, innovative social/cultural criticism & uninhibited class-war humor. “With its heady mix of surrealism, the [ndustrial Workers of the World heritage, free jazz & Bugs Bunny…Look here for links between the Beat Generation ‘Mimeo Generation’ & later Underground Press, but also between traditional Marxist theory & the new ‘critique of everyday life’ developed by an increasingly defiant & countercultural young left that made Martha & the Vandellas’ ‘Dancin’ in the Streets’ its international anthem”.–Paul Buhle