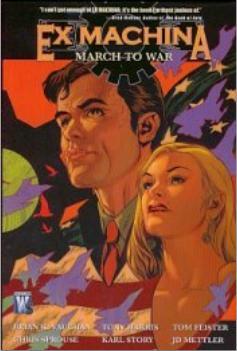 
In this collection, an apparent terrorist attack kills four people at a rally protesting the Iraq war. As anti-Muslim violence rends the city, Hundred is forced to use his power to control machines to track down the perpetrators. Despite the series’ high-concept premise and plot-driven nature, its most notable aspects are Vaughan’s compelling characterizations and adroit dialogue, aided immeasurably by the ramped-up realism of Tony Harris’ artwork.