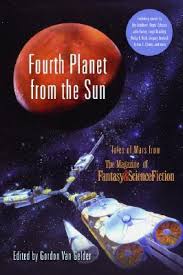 Fourth Planet From the Sun


In the minds of readers and writers of science fiction and fantasy since H. G. Wells’s War of the Worlds, Mars has been the hottest of topics. The fourth planet from the sun is the confirmed obsession of millions of Earthlings, and it is not a fixation that will go away. Perhaps noting the tens of millions of hits on the NASA websites during the recent exploration of Mars, President Bush has declared a manned visit to the red planet the next great goal of the space program.

The widespread passionate preoccupation with Mars, combined with the masterful storytelling of the legendary writers in this volume, will seize the imaginations of readers of any generation From the soul-searching poetry of Ray Bradbury’s prose to the weirdly paranoid and baroque visions of Philip K. Dick, World Fantasy Award-winning editor Gordon Van Gelder offers some of the greatest science fiction writing on the red planet in Fourth Planet from the Sun..