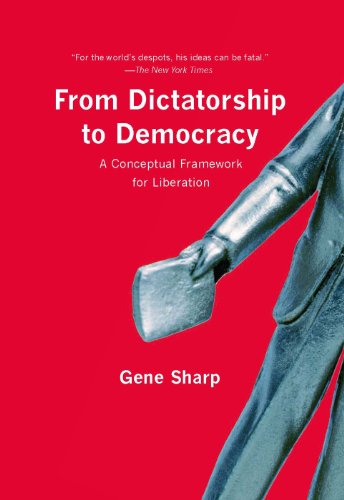 From Dictatorship to Democracy: A Conceptual Framework for Liberation


Twenty-one years ago, at a friend’s request, a Massachusetts professor sketched out a blueprint for nonviolent resistance to repressive regimes. It would go on to be translated, photocopied, and handed from one activist to another, traveling from country to country across the globe: from Iran to Venezuela—where both countries consider Gene Sharp to be an enemy of the state—to Serbia; Afghanistan; Vietnam; the former Soviet Union; China; Nepal; and, more recently and notably, Tunisia, Egypt, Yemen, Libya, and Syria, where it has served as a guiding light of the Arab Spring.

This short, pithy, inspiring, and extraordinarily clear guide to overthrowing a dictatorship by nonviolent means lists 198 specific methods to consider, depending on the circumstances: sit-ins, popular nonobedience, selective strikes, withdrawal of bank deposits, revenue refusal, walkouts, silence, and hunger strikes. From Dictatorship to Democracy is the remarkable work that has made the little-known Sharp into the world’s most effective and sought-after analyst of resistance to authoritarian regimes.