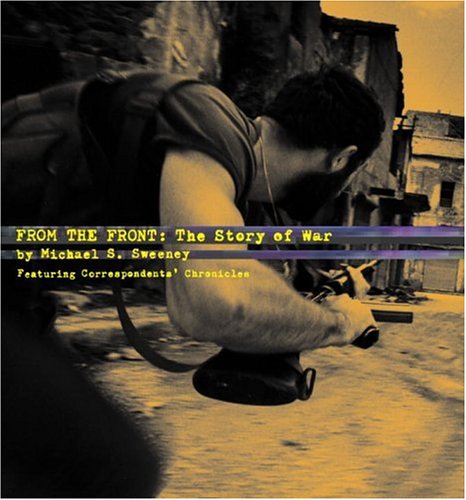 From The Front: The Story Of War


Discover the fascinating role journalism has played in war – in recording it, in helping determine its strategies, and in the final impressions of wars in history. This book gives new insight into how the world learns about war and is influenced by it. Sweeney gives a running commentary on wars of modern history by delving into the lives of the journalists who covered the wars: artists, photographers, and writers. This gives a behind-the-scenes twist to the event of war, the officers of war, and those who comment on war. Stunning visuals from the archives of LIFE magazine, from London’s Imperial War Museum, from dozens of archives, and from private collections through the NEWSEUM, bring the journalist’s craft – and the art of war – to life. These include photographs, artwork, maps, and pages from diaries or notebooks – sometimes pierced with bullet holes or stained with blood. Photo Editor Susan Blair and Lead Researcher Harris Andrews, who both worked on numerous Time-Life war series have combed archives and private collections to find images that will tell a story unwaning in its immediacy. PHOTO ESSAYS BY RENOWNED PHOTOJOURNALISTS: Compelling photo essays between each chapter will focus on the work of one photojournalist, or on the advancement of a technology integral to journalism. Featured photographers will include Alexander Gardner (Matthew Brady’s Civil War Partner), Larry Burrows of Viet Nam fame, Life magazine legend Robert Capa, The Bang Bang Club of Somalia, and the photographers of 9-11; techniques will include the art of the Motion Picture as a news medium. TEXT ESSAYS BY NOTED CORRESPONDENTS: The book will also have jewels throughout in the form of text essays written by experts in fields of journalism. We are approaching such experts as Morley Safer of 60 Minutes fame, on writing about television in war – he covered a controversial event by television in Viet Nam; Richard Hottelet, who made radio broadcasts from Normandy; Joe Medicine Crow, whose great-grandfather was at Little Bighorn and told him the story of Custer’s newsman, Mark Kellogg; Roy Gutman, who uncovered the death camps run by the Bosnian Serbs; and Kamal Kasparic, the U.S. trained sportswriter who returned to his Sarajevo home to publish his family’s daily newpaper, despite evictions, death threats, and the bombing of his building.