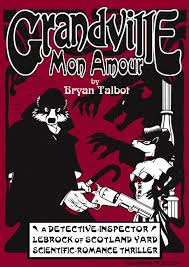 
A steampunk crime thriller fantasy with antropomorphic characters set in an alternate present in which France won the Napoleonic Wars.

Convicted psychotic killer and extremist fanatic Edward “Mad Dog” Mastock violently escapes the guillotine’s blade in the Tower of London to once again terrorize the Socialist Republic of Britain. But dogging Mastock’s bloody footsteps is his longtime adversary and nemesis, Detective Inspector Archie LeBrock, at odds with Scotland Yard and intent on bringing Mastock’s horrific murder spree to an end, once and for all. Aided by his friend and colleague Detective Roderick Ratzi, LeBrock follows the trail of carnage to Paris, otherwise known as Grandville, the largest city in a world dominated by the French Empire that is the prime target of Mastock’s sadistic terrorism. Can LeBrock capture the Mad Dog before he can mete out his final vengeance, or will LeBrock’s own quest for redemption be dragged to ground by the demons of his past?