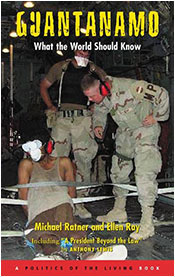 
Guantánamo: What the World Should Know has proved to be a disturbingly accurate account of the Bush administration’s tangle with civil liberties and torture. Written by Michael Ratner (Center for Constitutional Rights President and co-consul on the case of Rasul v. Bush) and Ellen Ray (Institute for Media Analysis President), Guantánamo is the most authoritative documentation to date on President Bush’s moves toward a network of detention centers–a system without accountability, which flouts U.S. and international law.

With a resource section that includes the Gonzales memo to President Bush and excerpts from the Geneva Conventions, Guantánamo provides strong evidence of Ratner explains how Gonzales and the Bush Administration are acting to radically alter America’s historic commitment to civil and human rights, and why all Americans should resist what is being done in our name.

Gathered together for the first time, Guantánamo: What the World Should Know includes the governmental memoranda that led to the conditions at the Naval Station at Guantánamo Bay, Abu Ghraib and beyond.