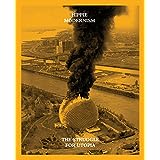 Hippie Modernism The Struggle for Utopia


Commentary and art installations based around utopianism and the Hippy movement.