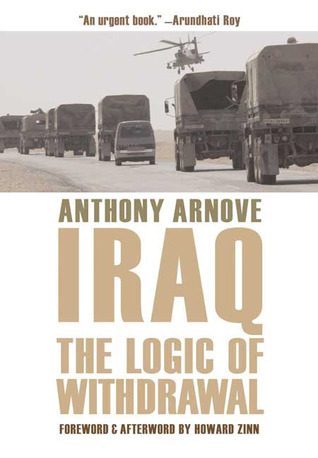 Iraq: The Logic of Withdrawal


Three years after the start of the war in Iraq, violence and misery continue to plague the country, and conservatives and liberals alike are struggling with the question of when—and under what circumstances—U.S. and coalition forces should leave. In this cogent and compelling book, Anthony Arnove argues that the U.S. occupation is the major source of instability and suffering for the Iraqi people. Challenging the idea that George W. Bush has ever been interested in bringing democracy to the country—as well as the view held by many on both sides of the political spectrum that it would be more damaging to leave prematurely—Arnove explores the real reasons behind the invasion. He shows why continuing the occupation is both a wildly unrealistic and reckless strategy, one that is making the world a more dangerous place.

Iraq: The Logic of Withdrawal concludes by laying out a clear vision for the antiwar movement, one that constructively involves soldiers, military families, and the many communities affected by the occupation, who together, Arnove argues, can build the needed coalition to bring the troops home.

Nearly forty years ago, historian, activist, and bestselling author Howard Zinn—whose foreword and afterword frame Arnove’s book—published Vietnam: The Logic of Withdrawal, which argued with remarkable foresight that getting out of Vietnam was the only realistic option. Iraq: The Logic of Withdrawal will likely prove equally prescient.