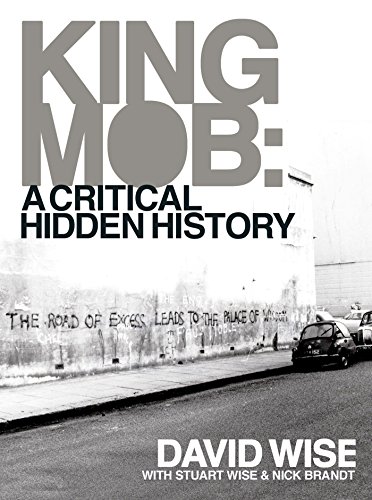 
The psycho-mythological legacy left behind by King Mob, nowadays often tied up with its assumed influence on Malcolm McLaren/the Pistols and Punk Rock (and via it’s wider Situationist context, Factory Records and the Hacienda) far outweighs the physical imprint they left behind in the form of six glued together copies of it’s often wildly and deliberately provocative publication, and the iconic graffiti left up around West London and beyond. ﻿

From a radical working class perspective, Dave Wise (helped by brother Stuart and longtime collaborator Nick Brandt) gives a first hand account of the (loose) formation of King Mob after their core members were excluded from the Situationist International by the schism-happy Debord in 1967. (Not, unfortunately, as the story used to go, after Debord came to London looking for the crack squad of pro-situ streetfighters he’d heard about, and found Dave and Stuart W. sat in front of Match of the Day getting on the lager- it never happened). “A Critical History.” celebrates their attempt to move “from the Situationist salon to the street” , whilst not shying away from identifying tactical, strategic and theoretical holes in the groups day to day actions, as seen by brothers Dave and Stuart.

Plans to blow up waterfalls, getting arrested on demos dressed as pantomine horses (the back end got off in court, on the grounds he didn’t know what the front end was doingseriously), sharing oversized baked bean costumes with ultra-Maoists on Vietnam marches. ﻿

Getting high and hungrily devouring Coleridge, De Quincey, Rimbaud, Marx, De Sade, Breton, Joyce and Hegel. Pissing over the lectern whilst declaring the death of art at the 1968 English Surrealist convention, being (falsely) put in the frame for the 1969 Newcastle School of Art firebombing ; perhaps most infamously dressing up as Santa Claus in Selfridges toy dept, Xmas 1969, and watching the chaos of consumerism unfold before them as crying children had the King Mob freely-gifted toys wrenched from their arms by confused and desperate employees.

There was never any danger of King Mob withering quietly on the vine of ritualised opposition, but the downturn of the early 1970’s and the apparent end of any hope for imminent social revolution as the “forthcoming horror of a totalitarian free market society of pseudo-individualism” hoved into view , hit some of them harder than they could have imagined.

As more financially independent King Mob individuals drifted off into the warm embrace of various strands of bourgeois counterculture, others faced up to the harsher realities of the “capsized utopia”. Some didn’t make it through, as an at times unintentionally moving epilogue here recalls.

Dave Wise spent the next thirty five years combining casual work on the buildings with travel and immersive writing on everything from the Portugese Revolution to Punk, from deep-ecology to the Inner City Riots of 1984. As he continues with this “maimed praxis” into his seventies, “A Critical, Hidden History” is a living, breathing account of a brief moment in time, when the light got through the cracks in the wall, and a new world felt possible. As we career into the 21st century, with Capitalism apparently in semi-permanent crisis and new (often transient) zones of opposition appearing by the month, the relevance of the playful, life affirming, non-hierarchical, anti-capitalists King Mob seems as great today as it ever did.﻿