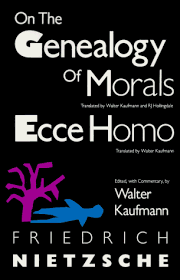 On the Genealogy of Morals / Ecce Homo


On The Genealogy of Morals is made up of three essays, all of which question and critique the value of our moral judgments based on a genealogical method whereby Nietzsche examines the origins and meanings of our different moral concepts.

The first essay, “‘Good and Evil,’ ‘Good and Bad'” contrasts what Nietzsche calls “master morality” and “slave morality.” Master morality was developed by the strong, healthy, and free, who saw their own happiness as good and named it thus. By contrast, they saw those who were weak, unhealthy, and enslaved as “bad,” since their weakness was undesirable. By contrast, the slaves, feeling oppressed by these wealthy and happy masters, called the masters “evil,” and called themselves “good” by contrast.

The second essay, “‘Guilt,’ ‘Bad Conscience,’ and the like” deals with (surprise, surprise) guilt, bad conscience, and the like. Nietzsche traces the origins of concepts such as guilt and punishment, showing that originally they were not based on any sense of moral transgression. Rather, guilt simply meant that a debt was owed and punishment was simply a form of securing repayment. Only with the rise of slave morality did these moral concepts gain their present meanings. Nietzsche identifies bad conscience as our tendency to see ourselves as sinners and locates its origins in the need that came with the development of society to inhibit our animal instincts for aggression and cruelty and to turn them inward upon ourselves.

The third essay, “What is the meaning of ascetic ideals?” confronts asceticism, the powerful and paradoxical force that dominates contemporary life. Nietzsche sees it as the expression of a weak, sick will. Unable to cope with its struggle against itself, the sick will sees its animal instincts, its earthly nature, as vile, sinful, and horrible. Unable to free itself from these instincts, it attempts to subdue and tame itself as much as possible. Nietzsche concludes that “man would rather will nothingness than not will.”