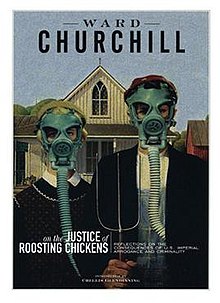 On the Justice of Roosting Chickens


The record speaks for itself: the “most peace-loving of nations” has ben engaged in brutal military campaigns in every corner of the globe, unceasingly, since its inception. In attempting to forever alter Americans’ false self-concept, Ward Churchill has meticulously chronicled both US military campaigns — domestic and foreign — 1776-present and US attempts to violate, obstruct and/or subvert International Law from 1945-present. The two chronologies, exhaustively researched and annotated, illustrate a heartwrenching history of senseless butchery and democracy deterred. In this context, the only fitting question for a nation still reeling from the wake-up call of September 11th is, “How can they not hate us?” In his newest offering, churchill demands that the American public shake off its collective unconscious and take responsibility for the criminality carried out in its name.