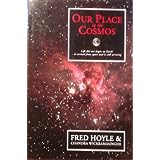 Our Place in the Cosmos


While a strict definition of “organic” is central to the authors’ thesis, Hoyle’s dominant voice is nonetheless eloquent when arguing that current science is still subject to the dogmatism that marked 16th-century reactions to Galileo and Kepler. The pre-Copernican theory of panspermia–that life was originally fertilized by meteors from outer space–is bolstered here with some 20th-century microbiology and a bit of righteous indignation. Few working cosmologists would entirely rule out the possibility, but not many popular science readers will be able to evaluate the case as presented here.