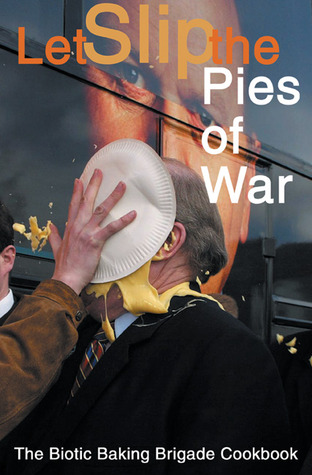 From the Groucho-Marxists of the Three Stooges, to Abbie Hoffman and the Yippies’ political pranks, the fine art of landing a freshly baked delicacy in the face of the reactionary, pompous and otherwise deserving has a been long and venerable tradition. As a way of highlighting a particular cause, gaining often spectacular media attention, or merely bringing the lofty down a crust or two, there is nothing quite so fine as a cream pie.

This anthology cooks up an intoxicating melange of history, analysis, tactics and recipes for this most edible of the political direct action techniques. Herein you’ll find political pop supergroup Chumbawamba’s history of pieing jostling for oven space with the Cherry Pie Three’s accounts of time in prison for humiliating the mayor of San Francisco. Tips from experienced pie-ers on the best way to slip into a shareholders’ meeting unobserved ammunition in hand—blend deliciously with tried-and-tested recipes for delectable vegan pastries (perfect for launching or dining upon). Generously sprinkled with some of the punchiest, wittiest communiques explaining just why those responsible for environmental destruction might be in line for their just desserts and the theory behind why pieing—why now.

An indispensable guide for anyone with a taste for -creative political dissent, a thirst for humor, or a grumbling stomach.

Editor, Agent Apple is the spokesperson for the Biotic Baking Brigade. He revels in delicious mischief and is a punsmith par excellence.