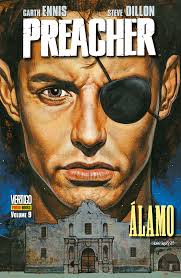 
A new edition of the classic trade paperback featuring PREACHER #59-66, the final chapter in the Preacher storyline and the conclusion of Jesse Custer’s quest to literally find God and take Him to task for the world’s injustices. As the Preacher’s crusade draws to an end, all of the players converge at the Alamo for a final showdown. With the love of his life, Tulip, by his side, Jesse makes his last stand against all of his enemies, including the Irish vampire known as Cassidy, whom he used to call friend. But as the dust settles in the Texas desert, no one can believe how this epic battle of good versus evil will end.