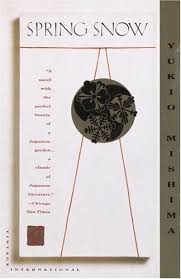 
The first novel of Mishima’s landmark tetralogy, The Sea of fertility

Spring Snow is set in Tokyo in 1912, when the hermetic world of the ancient aristocracy is being breached for the first time by outsiders — rich provincial families unburdened by tradition, whose money and vitality make them formidable contenders for social and political power.

Among this rising new elite are the ambitious Matsugae, whose son has been raised in a family of the waning aristocracy, the elegant and attenuated Ayakura. Coming of age, he is caught up in the tensions between old and new — fiercely loving and hating the exquisite, spirited Ayakura Satoko. He suffers in psychic paralysis until the shock of her engagement to a royal prince shows him the magnitude of his passion, and leads to a love affair that is as doomed as it was inevitable.