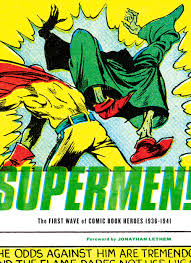 
The enduring cultural phenomenon of comic book heroes was invented in the late 1930s by a talented and hungry group of artists and writers barely out of their teens, flying by the seat of their pants to create something new, exciting, and above all profitable. The iconography and mythology they created flourishes to this day in comic books, video, movies, fine art, advertising, and practically all other media. Supermen! collects the best and the brightest of this first generation, including Jack Cole, Will Eisner, Bill Everett, Lou Fine, Fletcher Hanks, Jack Kirby, Jerry Siegel, Joe Shuster, and Basil Wolverton. If the reader is expecting to find an All-American group of altruistic do-gooders, he in for quite a jolt.