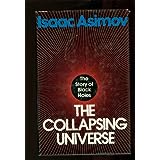 The Collapsing Universe: The Story of Black Holes


The universe is a very strange place and to me, the most bizarre objects are black holes. They are things where the gravitational attraction is so strong that not even light can move fast enough to get away. While the complete definition of black holes requires a great deal of sophisticated mathematics, the fundamental principles are easy to understand. No one is better at explaining science and in this thorough, non-mathematical explanation of how black holes can exist, Asimov is at his best. Asimov handily explains the workings of the Universe to his point in time (roughly 1986). He organizes the book logically, beginning with basic concepts such as mass and the simple structures of matter, and finishing with the complete cycle of stellar evolution. He explains the birth and death of stars and includes exciting descriptions of the many different forms that stars can take: yellow suns, blue giants, red giants, white dwarves, novas, supernovas, neutron stars, pulsars, and finally black holes. A must for anyone interested in studying astronomy for the first time. You won’t find a better explanation of how the universe began and, using only space, hydrogen, helium, built everything else from that, alone. This is the simplest, most straight-forward explanation of how gravity can attract enough mass (hydrogen atoms) until the force of gravity crushes those atoms and changes them into heavier atoms in a series of steps that can result in everything from the sequence our sun is undergoing to novas (that create brand-new, extra heavy atoms blow them out into space to drift, aggregate, and form new stars with planets around them) and – finally – black holes. So simple even a high school student can understand it and then remember the rest of her life. Find this book. Read it. You’ll be glad you did. It really is the best of them all.