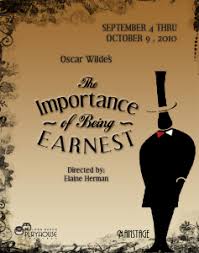 The Importance of Being Earnest


To avoid family duties, Algernon Moncrieff, a bachelor-about-town, has invented Bunbury, a sick relative who frequently calls him away. His friend Jack Worthing has invented a wicked brother called Earnest to disguise his own misdemeanors. When Algernon poses as Earnest to woo the lovely Cecily Cardew and Jack poses as Earnest to woo the hand of Gwendolyn Fairfax, confusion takes hold. It takes the discovery of an old black handbag and the formidable presence of Lady Bracknell before Jack and Algernon can discover the truth behind the deceit.