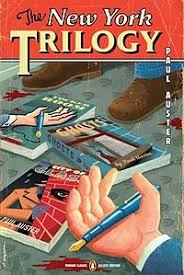 
Paul Auster’s signature work, The New York Trilogy, consists of three interlocking novels: City of Glass, Ghosts, and The Locked Room—haunting and mysterious tales that move at the breathless pace of a thriller.

As a result of a strange phone call in the middle of the night, Quinn, a writer of detective stories, becomes enmeshed in a case more puzzling than any he might have written.

Blue, a student of Brown, has been hired to spy on Black. From a window of a rented house on Orange street, Blue stalks his subject, who is staring out of his window.

Fanshawe has disappeared, leaving behind his wife and baby and a cache of novels, plays, and poems. What happened?