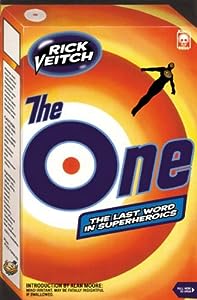 The One: The Last Word In Super Heroics


At the height of the cold war, a madman tricks the United States and the Soviet Union into launching their missiles and super-hero agents against each other. But instead of nuclear Armageddon, the act releases the secret cosmic potential of the human race. It was twenty years ago today that Rick Veitch took a bucketful of nuclear fear, added a healthy dollop of New Age mysticism, and served up a comic book super-hero series like no one had ever seen before. Written and drawn at the height of the final showdown between American style capitalism and Soviet era communism, The One spins an outrageous doomsday scenario that has proven even more relevant to today’s ongoing global crisis. The One begins with the United States and the Soviet Union pushed into World War III by a certain blonde billionaire who has figured out how to turn a profit from a limited nuclear exchange. But the threat of Armageddon awakens a mysterious force in the human race that disarms the missiles and sets the world on a high-speed collision course with evolution. Finding themselves stripped of their atomic arsenals, both the American and Russian governments unleash top secret super-soldier projects to wage hand to hand combat against each other. The ensuing “Superior War” makes nuclear weapons seem like mere child’s play.