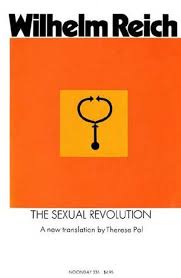 The Sexual Revolution: Toward a Self-Governing Character Structure


Reich explains that sexual neuroses derive from the lack of gratification of natural sexuality. Natural sexuality is left unsatisfied and thereby creates neuroses due to suppression of this sexuality by the authoritarian state. For Reich, this state is characterized best by the capitalist state that is based on the unit of the patriarchical family, within which the father mirrors the state as the absolute authority.