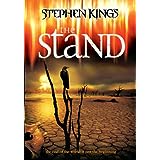 The Stand by King


a post-apocalyptic horror/fantasy novel by American author Stephen King. It expands upon the scenario of his earlier short story, “Night Surf”. The novel was originally published in 1978 and was later re-released in 1990 as The Stand: The Complete & Uncut Edition; King restored some text originally cut for brevity, added and revised sections, changed the setting of the story from 1980 (which in turn was changed to 1985 for the original paperback release in 1980) to 1990, and updated a few pop culture references accordingly.