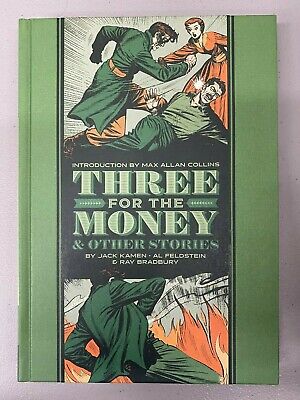 Three for the Money & Other Stories


Murder! For Money? Revenge? Fun?
Jack Kamen’s deft delineations of sensual scheming women, jealous husbands, and not-so-innocent children masks the murderous rage roiling beneath their cool exteriors.
This collection of Kamen’s classic EC Comics crime and horror tales from “Crime SuspenStories” and “Shock: SuspenStories” includes:
“The Orphan” – This one got EC into hot water during a U.S. Senate hearing. A little girl whose parents beat and neglect her witnesses a fight between her father, her mother, and her mother’s lover that ends with her father’s murder.
“Three for the Money” – A knife in his back and a bullet in his head. But who stabbed or shot a man who was already dead?
“The October Game” – Ray Bradbury’s evil Halloween party game perpetrated by a man who believes the child of his unfaithful wife is not his.
Introduction by Grand Master crime novelist Max Allan Collins. More inside…